RSS
← When a New Jersey Governor Makes Ass of HIMSELF…
Amazing.. How to Micro-Manage Bernie Sanders. →

Amazed that some women only have one look, and you wonder when she was a little girl if her momma told her.. just look evil Mary Pat.. Just give us your evil look.. 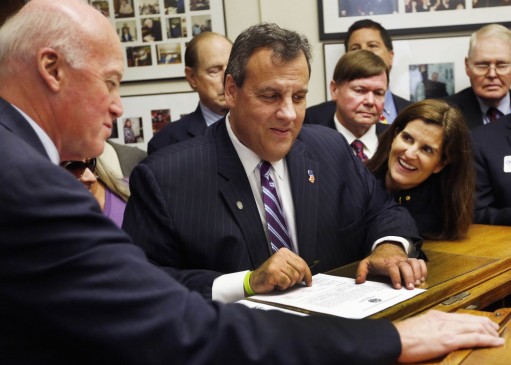 Is she needy or what?  she seems too desperate for him to even glimpse at her.. wonder if she has to hide in the other room when he arrives home..  Maybe they might give her a reality show..  “The Desperate Governors Wivey of New Jersey”..  If she’s trying to give the appearance of looking like the mop wifes.. she’s got a lot of plastic surgery to go.. Especially on that lower jaw.. Maybe she can have new lips put on..  Look at Bubba’s hands.. is that hair or fur?  They have to shave him before they normally take him into public?  Bubba Boy Christie.. the Doughnut Blimp..  Nope.. wouldn’t fit into into the White House.. she doesn’t have the class to walk up to the front door, and the him.. shoot they wouldn’t let him through the front gate..  You know what they say about a republican winning an election..  They have to bribe, cheat or steal elections, thats why he signed that nice piece of legislature to keep people from being registered..  Its time they realize we know whats going on too.. and like our Bernie Sanders said.. He would hate to ever think he had to stop people from registering to keep them from voting against him.. Makes for sorry people.. live in an open walk around mental ward and now their now worth a shit..

Posted by mcgreggorsback on November 10, 2015 in Uncategorized

← When a New Jersey Governor Makes Ass of HIMSELF…
Amazing.. How to Micro-Manage Bernie Sanders. →