Lets cover how I got involved with Astro.. First of all it was back in 2010 when I was approached by the fake lalolflorda, and Astro.. of course there was also Astrosucks hanging around, so many fake accounts it would make your head swim..

With Astro, the first I heard from her, she had been communicating with TH, and sent a request to me asking if I would communicate with her.. I did, and that went quite well or I thought it did for some time and suddently it disappeared. Poof.. last communciation was paranoid about the crazy’s having her new phone number all the way down in what was it, Alabama or Mississippi.. doesn’t matter, had it never used it.. When it came back up for air, much like a hairless, furless creature from under a rock, it only sent a few emails before the one that nailed her.

No sense in posting the header.. its confusing so let me explain it to you.. the information in the header advised that the email that was sent to me, plus any response would automatically be sent to both Radionewz.net and also to reddios.com. Now, if Astro was not involved with either one of these websites or the people who owned and operated them.. why would it be necessary to make sure all emails back and forth were to be sent to these two website? 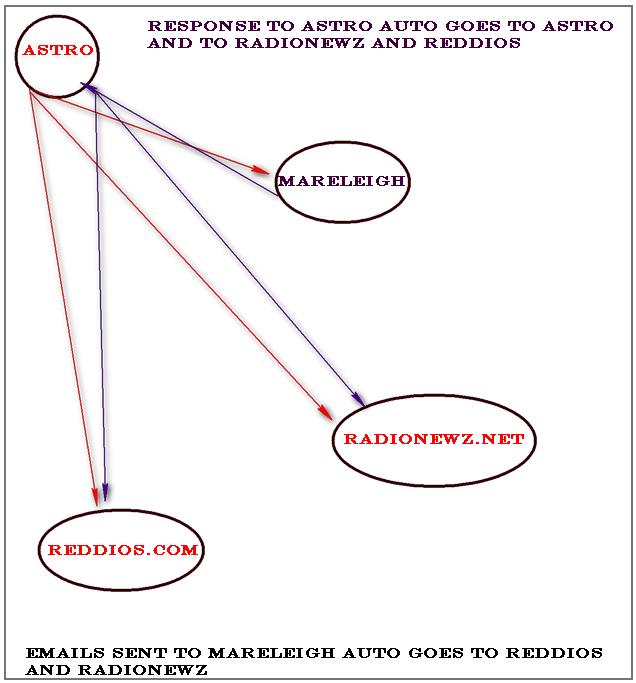 Simple, astro is either radio or one of the little hot pieces the crew puts up, I also remember who use to use that rocket – in fact Rocketman used it for along time, and all the other images astro uses have come from many of the fake sites.. imagination, not much.. Do you remember when I mentioned the location in Va.. the Domino’s pizza.. no response, didn’t mean anything to them.. The real Astro it means a lot too. Also, the Attorney in Va, by the same name as Susan, they are related, you cut throat researchers knew that didn’t you? I did save all of both astro and radio’s emails.. everyone of them.. and someday somebody is going to want to see them..

Now, Murt.. what can I tell you, you’ve been taken in time and time again, apparently very willingly and it never ends. I often wonder, do you get a call on sunday night that seems to last forever, long winded is not even the world, and by the time its through you’ve been talked into, conned and manipulated into either 1. believing a lot of bullshit.. 2. exhausted into agreement that you can survive the week of abuse by the crazys.. just a 4 hour heads up.. Maybe you should put an alert on your phone stating “All incoming calls will be recorded”, and then if the caller starts to ramble on, just record it.. permission by omission. That way you would always have evidence just incase all this mess turns sideways.. and they already made comments about your obit.. plus, I believe you know who radio really is and astro and half a dozen others.. And by the way, do something with an open heart.. go sign Misty’s petition.. http://www.change.org/petitions/president-of-the-united-states-and-united-nations-high-commissioner-for-human-rights-and-charlie-crist-free-misty-croslin .

Posted by mcgreggorsback on May 15, 2014 in Uncategorized